It's been so long since I've been able to work in the studio. This weekend I finished all of my homework on Saturday, so I would make sure to have time for my life outside of college. I don't want to meander on school too much, but I'll just inform everyone that it's much harder than I expected... To be humbled is a good thing, of course. 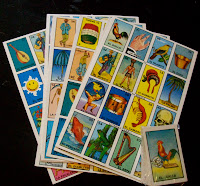 Anyway, I time to do some garage sale and thrifting with mom. I found a lot of cool things and spent a grand total of about $2.25! It was nice to hang out with my mom again, almost felt like a free summer morning. My favorite purchase was definitely the spanish "Loterias" boards. I've seen a lot of cool earring cards and matchbox assemblages made with them. I'm excited to attack them with some glitter glue and rhinestones to make my own assemblage creations! And, for 25 cents too!

After thrifting, I went in the studio for a little while too. Mom loves this little antique booth in "Antique Alley," which is in the Hollywood district. Last time we browsed, she found a nifty barrette with a barbie arm and monopoly house jumbled on the clip, which she really wanted. I definitely had a few barbie arms sitting around my junk drawer, after a OOAK (one of a kind) barbie project gone wrong, so I made  her one myself. I really like how it turned out, so I might try making some more and selling them on etsy with some of the other things I have on the site. I also wish my hair could be managed with a clip, because I'd just love to see my friends freak out about a barbie arm poking out of my hair! I think I'd get too much amusement out of that. :)
Posted by J'reyesha at 9:09 AM No comments: 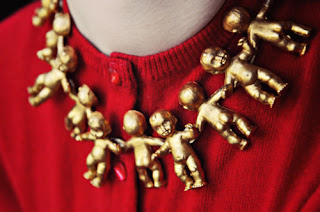 I helped a friend make baby earrings not too long ago, which has somehow gave me a soft spot for baby jewelry in general. I just found this adorable picture of a baby necklace. I think it's a great picture and is really complimented by the red sweater the model is wearing.
Posted by J'reyesha at 1:40 PM No comments:

"Wage," the newest addition to our family

I'd like to introduce my sister's star birthday present and newest addition to our family: Wage, the Ugly Doll. Here he is peeking out of our bag at the mall - looking a little out of place and making people stare. I think he's the most hilarious toy my sister's ever wanted, but to say the least, I'm quite a fan of him. 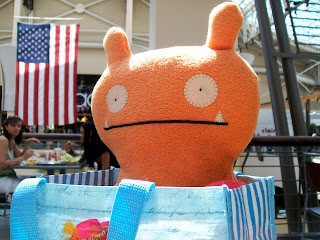 It feels like forever since I've blogged here! I have so much to talk about, but I don't want to make an entire text filled post, so I'm going to keep it as terse as possible.

Important update: I'm officially in college. So far, it's taking up a good portion of my life - slaving over calculus homework, tedious chemistry lab reports, and all of the required freshman excursions. I just can't believe I'm finally here. It's everything I've ever thought about since I was a little girl. Disappointed that it's almost exactly the same as high school? A little. :) 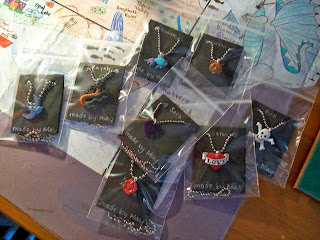 Anyway, since I last blogged I have been keeping very busy. My sister's birthday passed, which was quite a fiasco of a birthday party. My favorite part of it was definitely the coolest party favors ever. Mom bought a bag of rockabilly tattoo buttons from the craft store, so we cut the button part off and drilled through to make kitschy cute necklaces. (Just an FYI: I have the coolest crafting drill, which can literally drill through everything. It's my favorite.) We found a cute way to package them too. They're adorable and I can't wait to make more   for fun.

Also, August's Last Thursday on Alberta was a blast. It was my first time vending by myself without mom, but my friend and I set up our tables side by side and both sold a lot of items. Our tables were probably the most ridiculous tables down there. I sold lego jewelry and whatnot while my friend had her collection of miniature baby earrings. Let's just say we had a lot of funny conversation. My lego frames were a hit, because I'm officially out of stock! I've been collecting frames from 'Goodwill' now to lego decorate and sell, since they were so popular. The only problem is that our new jewelry stand was probably the worst idea, due to the wind that day. It kept falling off the table and even broke a few of our necklaces! Other than that, it was great. I can't wait until next month.

Last, but not least - I'd like to share my new epiphany. I was thinking about myself as an artist. I realize that more than anything, I'm a crafter. I can make art definitely, or what is considered a more fine art - painting, textiles, assemblages. But, more than anything I get the most satisfaction of crafting kitschy items. So, here I am, about 8 years into doing what I've been doing, finally making a probably obvious conclusion. Self initiated crafter, and proud of it! And, with that I'm off to make more lego frames! :)
Posted by J'reyesha at 1:00 PM No comments: