I have been so happy this week! Of course, I'm generally content, but what is the cause for this week's elation? A wonderful number... Just a few days ago I found out my International Baccalaureate (IB) scores and was pleased to see I received a '7' in IB HL Art, which is the highest score possible for an IB class, as well as one of the hardest scores to get for IB HL Art. It's considered one of the hardest classes for IB, despite it being an art class, which shamefully many often associate as an "easy A". Anyway, it has definitely made me gain confidence in my abilities as an artist and also made me question what I'm really good at. I still think about how much fun it would be to pursue art as a career and live out the whole "starving artist" cliche! However, I also like envisioning myself as an engineer, which is what I'm going to study in college. I guess I have to remember that my IB score was only decided by a logistical score rubric and that a score shouldn't make or break my opinion about my future in art, considering I never liked the idea about grading art before anyway.

Okay, I'm done talking IB. I spent the last four years of my life thinking about school! Though, I won't lie - I'm definitely more motivated to work in the studio now. I've started working on a few new projects too, like a final reconstruction of my sister's antique dollhouse, which I restored a few years ago before she decided she was too old for it. Hence has begun a recycled dream house of mine, using bottle caps and other materials. Pictures will be up soon - I want to do a before and after shot when it's finished. 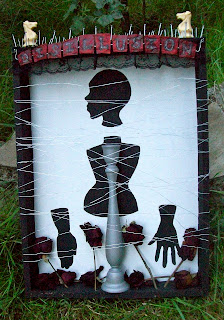 I also finished my vaguely macabre/carnival piece, which I've been working on for a few weeks. I've started brainstorming my artwork before I start it, just like I did in IB Art, and I find I really like the results. This piece is slightly darker than the work I've been doing for the last few years (and less politically charged since I'm not limited to a theme anymore), but it's a more mature version of what I used to make when I was younger. I actually started working on it when I thought I redecorating my room in a Victorian gothic style. I can officially say my room is a kitschy pink retro style, so this definitely doesn't fit anymore!

Today is also yard sale day, and I've been in charge of cashier since this morning. The hype of our sale is officially over and I have nothing but time to catch up on my summer reading.

Goodbye for now!
J'reyesha
Posted by J'reyesha at 1:21 PM No comments:

Mom and I have been working in the studio almost daily, so hopefully I'll have a lot to post about this week! I'm trying to keep up with this blog! A few months ago, I'd probably only had things to share about once every month, because I just didn't have the time with school and such. Let's just say summer and graduating high school makes working on art so much easier. I almost dread joining the college life when summer finally ends, because my art is going to have to take a break for a while.

Anyway, on a lighter note I've found another use for my legos! For those of you that don't know, I sell lego jewelry usually. I love working with legos and things that most of us consider toys. It's a way to bring the child back in all of us! My newest addition to the lego crafts are these fun lego frames. I made the first two for my dad's birthday, and liked them so much that I felt they needed to go on the site. I've been recycling frames I find by painting them black or red and adorning them with legos. I'm really stoked and can't wait to put them on the website! 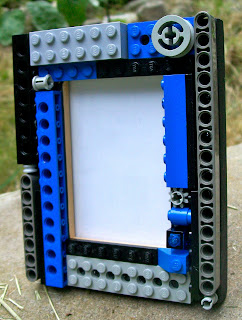 We took a trip to Seattle for the Fourth of July, where I enjoyed the Pike Street Market best of all. It definitely put our city's Saturday Market to shame, with all of its artists, great homegrown food, flying fish, and even a gum wall! Not to mention, it happens everyday rather than just weekends. Makes me feel like our artists are only part time, while Seattle's keep the art going all year long! Though, Portland artists definitely use a lot more recycled materials, so I can really appreciate that. :) 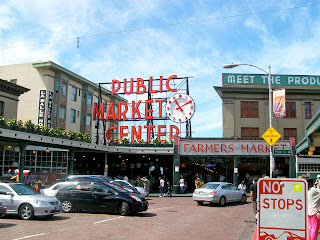 I had a great time, and found so much inspiration with all of the different artist's styles and techniques. I even bought an art piece from a friendly fellow stencil artist, Graff Roots. As a stencil artist myself, I really admire a great stenciler when I see one, because stencils can be very time consuming. He definitely inspired me to want to improve my stencils and work with more detail, because the outcome was very impressive. Working primarily with television and pop culture movie icons, his work pulls the best and most iconic images out of recognizable scenes. Check out the Graff Roots etsy store: http://www.etsy.com/shop/graffroots

After Pike Street Market, we did some thrift store and antiquing around Seattle. I found that Seattle is probably one of the best places to buy records! I bought so many classic 50's bandstand, 60's rock, and classic records at a great price. After our Seattle trip I came home wanting to listen to my records and work on art! Such a great combination! :)
Posted by J'reyesha at 11:08 AM No comments: